UPDATE 5PM: STORM HAS SHIFTED SLIGHTLY. TROPICAL STORM WATCH POSSIBLE FOR FRIDAY NIGHT IN SOUTH FLORIDA. THIS POST WILL NO LONGER BE UPDATED. CLICK HERE FOR THE LATEST.

BOCA RATON, FL (BocaNewsNow.com) (UPDATED 3PM FRIDAY, NOV. 6, 2020) — What was once Hurricane Eta has turned around, started to regenerate, and is likely to strike South Florida on Sunday or Monday as a tropical storm after trekking through the warm waters of the Caribbean. The path is not certain and the cone is huge, but an overnight change in the storm’s expected turn means the Keys, Miami-Dade, Broward and Palm Beach County are right back in the center of where Eta could hit.

Here is the latest forecast from the National Hurricane Center. Bookmark this page — we’ll update right here throughout Friday. Expect the next written update to be filed by 4PM Friday. 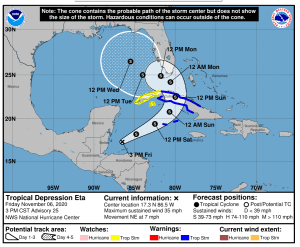