Eta On Course For South Florida.

UPDATE: 10AM Saturday, November 7, 2020. There is an update. Please click here. This page will no longer be updated.

BOCA RATON, FL (BocaNewsNow.com) (8:44 a.m. Nov. 7, 2020) — Eta is on her way. A Tropical Storm Warning may be issued later Saturday for South Florida, according to the latest advisories from the National Hurricane Center. Tropical Depression Eta has slowed just a bit, but is still expected to regenerate and strike South Florida as a tropical storm on Monday. Conditions are expected to deteriorate in the area on Sunday.

Here is the early Saturday morning update from the National Hurricane Center.

Tropical Storm Eta is expected to strike South Florida on Monday, with conditions deteriorating on Sunday. As of Saturday morning, November 7, 2020, a tropical storm watch is in effect for the region. A tropical storm warning may be issued late Saturday, according to the National Hurricane Center. 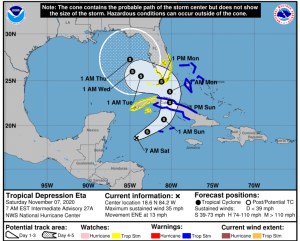