Storm “Ana” formed overnight, becoming the first named storm of 2021. The formation led to a tropical storm watch being issued for Bermuda, where tropical storm conditions are possible at some point during the day.

A second storm is forming off the coast of Texas. It is the Yellow X above, and has a 30 percent chance of development.

Is a tropical storm watch in effect? 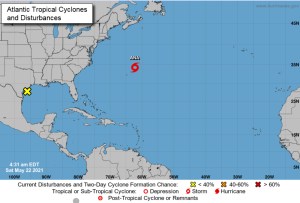